With the end of the year upon us, we at Sax want to remind you of some important tax changes and benefits that will impact your planning and preparation for the 2016 tax filing season.

The Protecting Americans from Tax Hikes (PATH) Act of 2015 changed several 2016 tax filing due dates.  While some states have not yet conformed to these new due dates, below is a recap of federal filing dates for calendar-year filers. 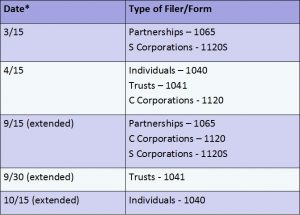 *If the due date falls on a weekend or federal holiday, the returns are due on the next business day.

Other important changes to note for your 2016 filings are as follows:

Also remember to take advantage of any applicable deductions before the end of the year, such as: